The Original Transition Academy in Redmond began to serve young adults with developmental disabilities in 2004. 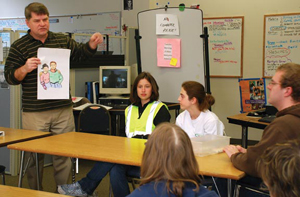 Up until the start of the Transition Academy in September of 2004, students with developmental disabilities were typically served in their home or magnet high schools. This often meant that students remained in a high school setting from age 15 through 21.

Realizing that there might be a better way to deliver services to older students, a district task force was formed in the Spring of 1999 to begin to tackle these issues. Its members represented a diverse cross section of the developmental disabilities community, including parents, teachers, and school administrators, as well as representatives from DVR, DDD, King County/DD, and direct service providers (supported employment vendors). The first challenges of the task force were to assess the state of services, identify needs and challenges, and then to agree on guiding principles. After several meetings, a mission, set of values, and desired transition outcomes were accepted as the guiding lights for the development of a new transition transition program.

The charge of this task force then became the development of a model program that led to many of the outcomes articulated in the then new Level 5 graduation standards of the school district. Simply stated, what should students know and be able to do as they exit the school system and transition into their lives in the community. For students with developmental disabilities this included the need to provide quality transition and other services which led to positive outcomes in employment, housing, transportation, social connections and membership.

The Academy opened its doors to its first class of 12 students and 3 staff in September of 2004. It's first graduating class in June 2005 consisted of 4 students. As the Academy has matured as a program offering, it has consistently grown in size over the years. In April of 2017 it was home for 33 students, 3 teachers, and 7 staff. Many, if not most of its graduates are working with the ongoing support of supported employment vendors (agencies).